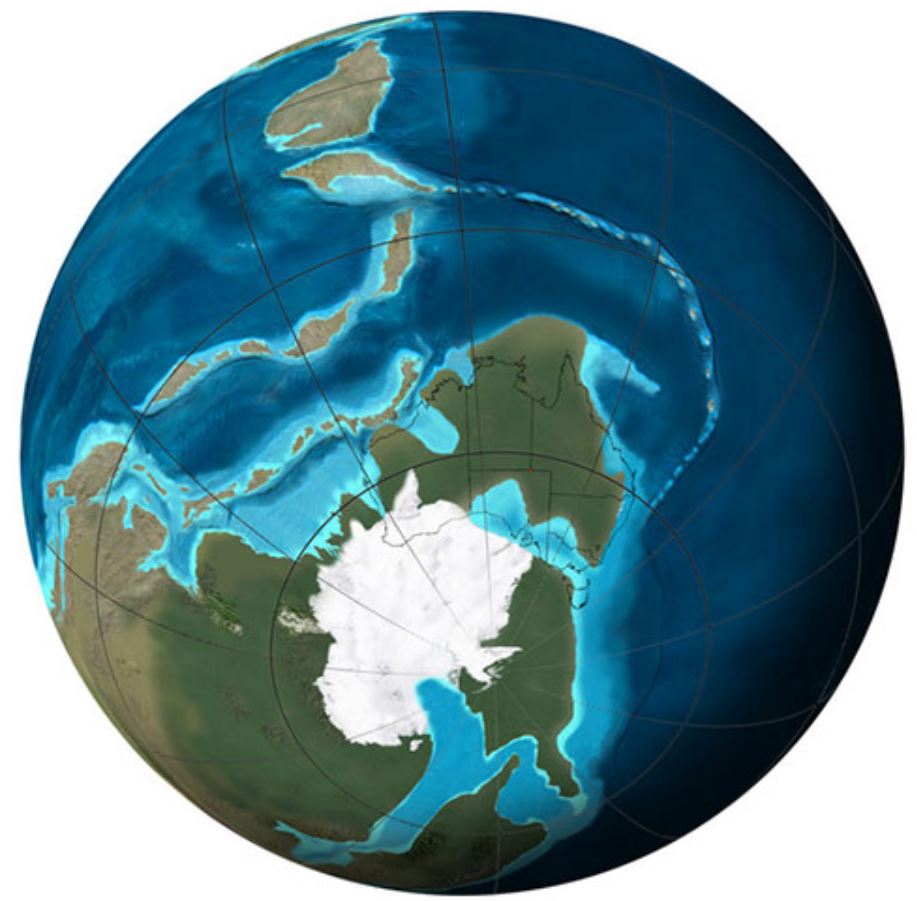 You are looking at an ancient Landscape, The Lerderderg River has carved a valley down to ancient bedrock where traces of a very old ice age are cared into the 250 million year old rocks.

Once glaciers covered your view to the horizon

Roughly 400-500 million years ago, the sea covered the area, allowing sand and mud to be deposited. After the sea withdrew, uplifting occurred, forming north-south running mountain ranges. This was followed by a long period of erosion. Approximately 250 million years ago, glaciers formed and as they moved over the land they exposed large granitic rocks. Rubble was deposited in the valleys and conglomerates and sandstone were deposited in the lakes and rivers that were created as the glaciers melted. These are some of the earliest glacial deposits known to exist in the world, adding to the geological significance of the Bacchus Marsh area

During the Permian (299-251 Million years ago) Victoria was located at much higher latitudes (near the South Pole), attached to a giant landmass called Gondwana (see reconstruction below). Gondwana itself was one of two land masses that formed the super continent Pangaea. The early Permian was a time of glaciation, with giant ice-sheets covering the southern-most parts of Gondwana, including Africa, America and Australia.While the Earth has seen numerous ice ages, this is the only confirmed glacial episode that effected Victoria. And two of the few places that exposes evidence of it ever having occurred is in the Lerderderg Gorge and at Lake Eppalock (100km to the North)

How did these internationally significant geological features re-emerge into the light of day after being buried for hundreds of millions of years under layer after layer of sandstone sediments?

Powerful as the glaciers were, it was the erosive force of water – not ice – that formed the Lerderderg Gorge. One million years ago, an uplift along what is known as the Rowsley fault blocked the path of the Lerderderg River, forcing it to cut down through the sandstone. Eventually – 300 metres down – the flowing water reached the scratched and polished sub-glacial pebbles and boulders that you can see embedded in the outcrops at the southern end of the gorge.

Plants and wildlife flourish in the park’s wide range of habitats. The 14,250 hectare Lerderderg State Park varies from the fern-lined river’s edge to damp forest pockets and dry rocky outcrops along high ridges. More than 320 native plant species have been recorded in the park, with 11 species regarded as either rare or threatened. Unusual associations of blue gum and manna gum flourish in the gorge.

So far as wildlife, the park plays host to 125 native bird species including rare peregrine falcons nesting in the rocky hills and powerful owls whose distinctive “whoo hoo’ call can be heard at dusk.

Of the 28 native mammals recorded, the bent-wing bat and the brush-tailed phascogale are considered threatened. Wildlife also include 21 reptiles and 16 amphibians such as the mountain dragon lizard and fresh water blackfish.

Powerful owls nest in the hollows of very large trees, often at the head of a gully,SOURCE Parks Victoria

The brush-tailed phascogale (Phascogale tapoatafa), also known by its Australian native name tuan,and other names, is a rat-sized arboreal carnivorous marsupial of the family Dasyuridae, characterized by a tuft of black silky hairs on the terminal portion of its tail. Males of this species do not live past the age of one, as they die after reproducing.